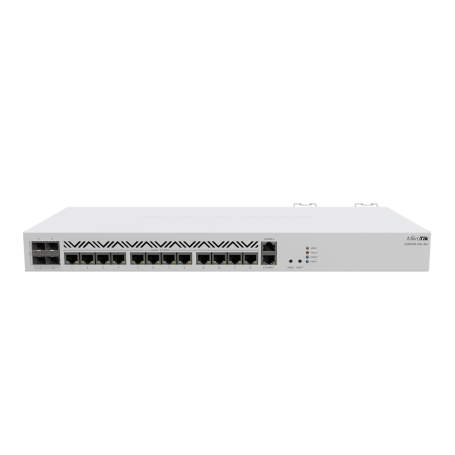 Mikrotik wanted to see the full potential of the good, old, reliable 10G networking combined with a modern CPU.

The CCR2116-12G-4S+ allows you to forget about CPU limitations in your setup. Like its younger brother – the amazing CCR2004, this router features the mighty Amazon Annapurna Labs Alpine CPU. 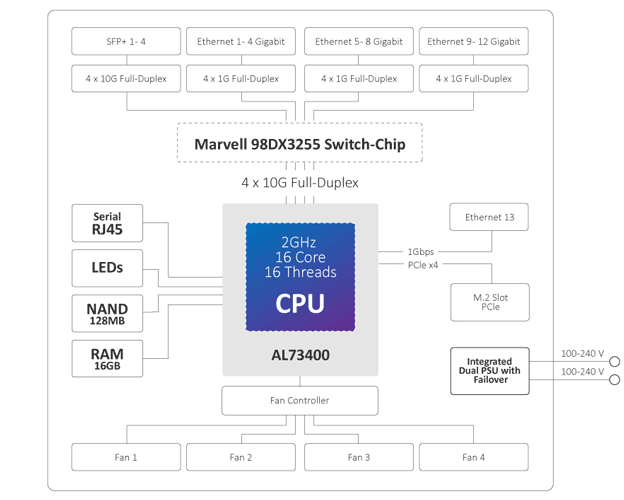 But with 16 cores running at 2 GHz, this CCR eats the other one for breakfast. For example, we see at least a 15% increase in single-core performance. And that is the most important aspect when it comes to heavy operations based on per-connection processing. Like queues, for example. CCR2116-12G-4S+ sets a new standard of single-core performance in the whole CCR product family! And it supports Layer 3 Hardware Offloading!

Obviously, you need the right connectivity to harness this power. There are four 10G SFP+ ports. They have a separate, full-duplex line connected to the Marvell Aldrin family switch chip. Then we have Gigabit Ethernet ports. 12 of them are running through the Marvel chip. And there is another Gigabit port connected directly to the CPU. For management purposes.

Each group of 4 ports has a separate full-duplex connection to the switch chip. No bottlenecks here. You can expect switch-like throughput in most setups. The new generation of processors offers mind-blowing performance. If we look at the CCR1036 - the powerhouse with a 36 core CPU, the new CCR2116 can easily double the performance. 16 cores vs 36 cores. Double the performance. Or even more.

If you are a rather large ISP, dealing with dynamic routing, massive BGPs, complex firewall rules, and intricate quality of service configurations...This is the right device for you. Combination of raw power and utility with the reliable 10G networking. And yes, like with any ISP-level device, we’ve included a dual-redundant power supply. So you have one less thing to worry about.